Space mail flown cover regarded to Dragon CRS-21 mission. The envelope was aboard of the International Space Station in 2020.

The cover was cancelled with the “ISS” octagonal board seal, the “Russian Post. ISS. Russian Segment” official board post mark and the “Russian Segment of International Space Station” board souvenir seal both dated 7 December 2020, the day when the US “Dragon CRS-21” unmanned supply spacecraft was docked to the ISS. It was the first flight for SpaceX under NASA's CRS Phase 2 contract awarded in January 2016. It was the first launch of the new generation of Dragon cargo capsules also known SpaceX Dragon 2 or Cargo Dragon 2. The first 20 flights, spanning a period from 2012 until earlier 2020, used a now-retired version of the Dragon spacecraft. Highly likely it was the last date (07 December 2020) of the using of the old “Russian Post. Board of ISS. Russian Segment” round board post mark. The “year” figures in the date setting mechanism were made only till “20”. So, it was impossible to use the post mark in 2021. The new “Russian Post. Board of ISS. Russian Segment” round board post mark was delivered to the ISS by a Progress spacecraft in 2021.

The cover was autographed by all 7 cosmonauts/astronauts who were aboard the station at that day: Russian cosmonauts Sergey Ryzhikov and Sergey Kud-Sverchkov; American astronauts Kathleen Rubins, Michael Hopkins, Victor Glover and Shannon Walker; Japanese astronaut Soichi Noguchi.

It is necessary to remark that the cover was not carried by the "Dragon" spacecraft. The cover was delivered to the ISS and then back to Earth by a Russian cosmonaut aboard a Soyuz MS spacecraft. 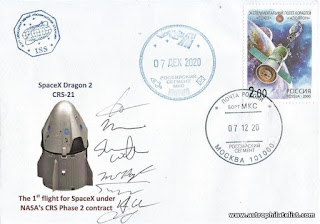