This November, ESA's Mars Express spacecraft carried out a series of experimental communication tests with the Chinese rover (CNSA) Zhurong Mars. Mars Express successfully captured the data sent "blindly" by the rover and relayed it to Earth, where it was sent to Zhurong's team in China.

The Zhurong rover, commanded by the Tianwen-1 orbiter, points its radio towards the Martian sky. At any moment, ESA's Mars Express will begin to pass overhead. Zhurong begins to transmit a signal into space. There is no way to know if the message is received.  Mars landing vehicles and rovers collect data that helps scientists answer fundamental questions about geology, the atmosphere, the surface environment, the history of water, and the potential for life on the Red Planet. To bring this knowledge back to Earth, they first transmit the data to a spacecraft orbiting Mars. These orbiters then use their much larger and more powerful transmitters to "transmit" the data across space to Earth. "Normally, an orbiter like ESA's Mars Express first sends a hail signal to a rover as a 'hello'," says James Godfrey, director of operations for the Mars Express spacecraft. "The rover then sends a response to establish stable communications and initiate the two-way exchange of information. But this depends on the compatibility of the rover's radio system with that of the orbiter." Since Mars Express broadcasts its "hello" signal using communication frequencies other than those received by the Chinese rover Zhurong Mars, two-way communication is not possible. But in the other direction, Zhurong can transmit a signal using a frequency that Mars Express can receive. Relay radio on Mars Express has a mode that allows for this one-way communication ("blind" communication where the sender cannot be sure that their signal is being received), but until now the technique had not been tested on the spacecraft.  In November, ESA's Mars Express and CNSA's Zhurong teams carried out a series of experimental communications tests in which Mars Express used this "blind" mode to listen for signals sent by the Zhurong Rover.  The experiments culminated in a successful test on November 20. "Mars Express has successfully received the signals sent by the rover and our colleagues from the Zhurong team have confirmed that all data has reached Earth in very good quality," says ESA's Gerhard Billig. "We look forward to further testing in the future to continue testing and further improving this method of communication between space missions." Data transmitted by Mars Express reached Earth at ESA's ESOC space operations center in Darmstadt, Germany, via communication antennas in deep space.  From there, this data was sent to Zhurong's team at the Beijing Aerospace Flight Control Center, which confirmed the test's success. 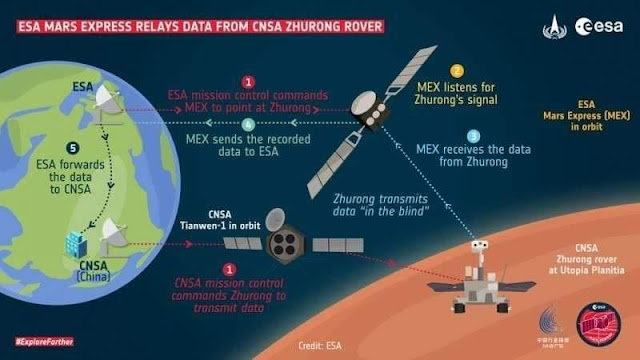