“The general appearance of the emblem of the Prichal continues the main idea and symbols that have been used in such a chevron of the multipurpose laboratory module” Science “, including the logo of the state corporation Roscosmos and the corporate red edging, but the pentagonal shape should be called unique,” the state corporation said. This form is due to the fact that the module has five passive docking nodes for docking of manned and cargo ships of Russian production and for the possible expansion of the configuration of the Russian segment.

Two stars in the left corner of the pentagon symbolize two new modules in the Russian segment – “Science” and “Prichal”. There are also, two large stars that can be seen in the right corner of the emblem, they symbolize the Zarya functional cargo unit and the Zvezda service module. The two smaller stars represent the small research modules Rassvet (MIM-1) and Poisk (MIM-2).

The launch of the Soyuz-2.1b carrier rocket with the Progress M-UM cargo spacecraft and the Prichal is scheduled for November 24. Module “Prichal”, intended for additional build-up of the Russian segment of the ISS, will have six docking nodes for receiving and placing other modules and spacecraft around it. 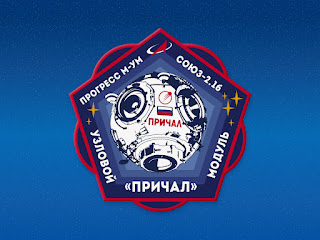